When the afternoon school bell rings, students often scurry away to various sports, extra-curricular activities, home to play video games, or off to hang out with friends. Some groups of students chose a different outlet for their after school interests: contemporary music making.

In an effort to shed light on what composers are doing and how they are doing it in the ongoing effort to educate future generations of musicians on how to engage contemporary music, we will spend time interviewing and reporting on composers talking about their projects in schools.

This first interview is with composer Jeremy Podgursky, a composer from Louisville, KY who recently devised a project wherein he went into local high schools and worked directly with students in an after school settings. Currently a doctoral student at Indiana University, Podgursky reflected and wrote to us about his experiences with young musician/composers. 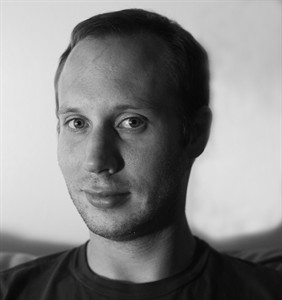 Podgursky says that he loosely based the sessions with the high school students on how he teaches private composition lessons to beginner/young composers. Every week he focused on a specific element of music (rhythm, harmony, melody, time, form, etc.). The students would be given an exercise which addressed the specific element for the week. Since the high school students were meeting in a group setting for only 90 minutes once a week, they were given simplified exercises that would meet the expectation of the exercise while not overwhelming them with a presumption of musical knowledge.

The meetings with these students largely centered around listening to and discussing musical examples. To this end, Podgursky says, "The most important element of playing music for the kids was to mix up the genres and include pop music." He goes on to elaborate that simply because the students were mostly writing for acoustic instruments didn't mean that he had to limit the reperatoire to only the standards for those instruments. Further, he says:: "just because they were composers didn't mean the focus was on 20th/21st century high art music. I played them Beethoven, Bach, Brahms, Bjork,  The Beatles, Bartok, and Berio."

After five to six weeks of topical discussions, listening, and compositional exercises, Podgursky turned the students loose to compose their own pieces. Subsequent meetings would involve Podgursky floating among the students and discussing their individual projects with them. He notes that at one particular rural high school where he did this program, the students were involved in a successful band program, were highly motivated, and could read musical scores with ease. In that environment, during the latter half of his program, he could place one of the students' scores in front of the class for discussion.

The eleven to twelve week program culminated with a recital of the student's music. Podgursky offered the following final reflection on his experience:

I would say that the biggest difference between the high school students and college students is the emphasis placed on fun. I was very conscious not to pressure them to finish anything. I had to make sure that they always felt the extra-ciricular nature of the program because it was totally optional.


If he were to run the program again, he said that he would offer more opportunities for improvisation. He cites Murray Schafer and the book The Composer in the Classroom as sources of inspiration for future endeavors.

Thank you, Jeremy Podgursky, for creating an opportunity for interested, young musicians to encounter contemporary concert music in a meaningful way and for sharing your reflection on these experiences with us. We hope that as you continue in your career as a composer, there will always be a space for endeavors like this.
Posted by pagedrakemusic at 6:21 PM No comments:

Oh, say can you sing?

As many of you watched the Olympics this year, you may have noticed the varying degrees of the athletes’ knowledge of their own national anthems. Some sang out proudly, with wide grins. Others were too overcome with emotion to sing a note. There were also a few that seemed to be nervous, their lips moving reservedly and their eyes darting away from the cameras. Did they feel uncomfortable with the song that presents their country to the rest of the world? Therefore, we dedicate this blog post to “The Star-Spangled Banner.”

Our national anthem is a difficult one to sing and understand. It describes a violent battle scene. The voice has to utilize a wide range and leap from one note to another. The poetry employs some arcane phrasing, and the first verse (typically the only one sung) ends with a question.

Certainly, “The Star-Spangled Banner” is not easy. There were great debates about choosing this song to be our national anthem. One of the great arguments against this particular option was that it was so difficult to sing, and school-age children, especially, have great trouble learning it. On the same token, however, it is that difficulty — those distinctive downward leaps and the soaring, high middle section — that make our anthem distinct and recognizable. The very real struggle to learn this song teaches our students that virtues of citizenship and perseverance are an important, valued part of our culture.

Take a few moments this month to ask your students to sing our national anthem. You might want to grab a video camera: Our youngest students sometimes come up with amusing word substitutions, which are worth recording for posterity! Gently correcting these errors in lyrics and melody is a process. By the end of this process, however, students understand that our national anthem is something to be revered and respected.

Oh, say can you see by the dawn’s early light
What so proudly we hailed at the twilight’s last gleaming?
Whose broad stripes and bright stars thru the perilous fight,
O’er the ramparts we watched were so gallantly streaming?
And the rocket’s red glare, the bombs bursting in air,
Gave proof through the night that our flag was still there.
Oh, say does that star-spangled banner yet wave
O’er the land of the free and the home of the brave?

While the aforementioned difficulties associated with "The Star Spangled Banner" can be daunting to both teacher and student alike, there is a fantastic opportunity for composers to seize! Namely, by breathing new life into the arcane aspects of this tune and its lyrics through new arrangements exploring new harmonic and rhythmic possibilities. Granted, if you accept the premise that teaching this song to young students is already a challenge, then you might not want to veer too far away from conventions. However, there are still ways in which to make the music both accessible to younger students while giving the tune and lyrics the respect they deserve.

We recently had the opportunity to arrange "The Star Spangled Banner" for middle school chorus. The choral director at this particular school was frustrated with the mundane arrangements he had performed for so many years and wanted something new. The result was a nice opportunity for collaboration. 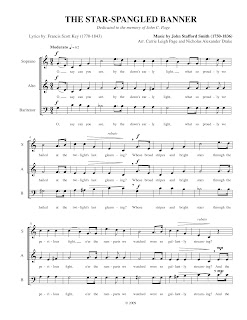 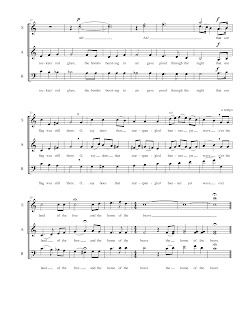 Posted by pagedrakemusic at 8:38 PM No comments:

It's absolutely tactile, it becomes 'Mommy, I saw a thousand rainbows!' through hearing sounds. That's transcendence, that's something where you can actually bring abstraction to feeling, to something memorable.

This quote from a recent interview with Yo-Yo Ma illustrates his enthusiasm for music of the past century. He briefly discusses playing a movement of Messiaen's Quartet for the End of Time for a group of children. He described to them the colors that Messiaen saw in the piece and used that description to help give the children a frame of reference from which they could now engage the piece in their own imaginations.

I chose the above quote as a jumping off point for this blog entry because it illustrates how easily it is to communicate directly to children's imaginations about music. In the interview, Mr. Ma makes some other fine points about tradition versus invention and translating abstract ideas into concrete sounds. One thing that stuck with me after reading this interview (which was an interview mainly on Ma's new recording of bluegrass music) was the general sense of newfound enthusiasm I had for contemporary concert music. A musician steeped in classical tradition, such as Yo-Yo Ma, during an interview on a new album of bluegrass music, makes me (a composer of concert music) feel invigorated about new concert music.

What strikes me about Mr. Ma's discussion of music is his passion for and dedication to exploring contemporary music. In another portion of the interview, he says:


I've never in my mind put a lid on nature's creativity. Humans put a lid on things. Nature has its own frame and I think of humans as part of nature. So world classical music is actually humans dealing with humans in the natural world. Every single tradition that I know of is the result of successful creation. And world classical music already is: Phillip Glass, Toru Takemitsu, Tan Dun, Bartok, Steve Reich, Puccini . . .

The question for us then becomes: How can we foster such appreciation, understanding, yearning for and experience of contemporary music among the generations of musicians just beginning their musical journey?

Moreover, if you are a composer, the thought may have occurred to you: What is the future of my music, and what are some fundamental ways a composer might be able to help ensure its future?

One way for composers to answer these question for themselves is to write music that would help teachers better understand and be able to teach contemporary music. As a smattering of articles published in music education journals over the past few years indicates, there is, at least, an occasional interest in this topic of new music pedagogy among composers and educators. While pieces have been composed for the purpose of exposing and education musicians who are new to contemporary music -- everything from short piano pieces akin to Bartok's Mikrokosmos to a large amount of band music -- there is room for so much more to be written.

Then the question becomes: how available is this music to teachers and performers who want to embark on a journey through new music but are not sure where to start? Where do they look for this music? Perhaps, how can they have pieces tailored to their specific student's interest and learning needs on their instrument?

Composing music for the early stages of musicianship -- once a commonplace compositional activity -- has long since taken a back seat to writing for virtuoso performers. A sound vision of twenty-first century musicianship should include a consistent sampling of contemporary music in the course of private instrumental lessons. Let us encourage the type of hunger and enthusiasm that we see in Yo-Yo Ma from all of our musicians such that the musical traditions we love can be invigorated with the inventions of our time!

Posted by pagedrakemusic at 3:04 PM No comments:

Greetings and welcome to the first blog dedicated exclusively to the pedagogy of contemporary concert music! Here you will find discussions on pedagogical topics in contemporary music making from extended instrumental techniques to the use of electronic sounds and pedagogical music composed in recent decades dealing with these techniques. While this blog is dedicated to increasing the knowledge base and awareness of contemporary music among music teachers, it is also our intention to make these blog entries accessible to the budding musician who has an interest in contemporary music but may be unsure how to approach and access it. Enjoy, and check back often for new and exciting repertoire to try with your students or on your own!

For more information about us, check out our website: http://www.pagedrakemusic.com/
Posted by pagedrakemusic at 8:28 PM No comments: